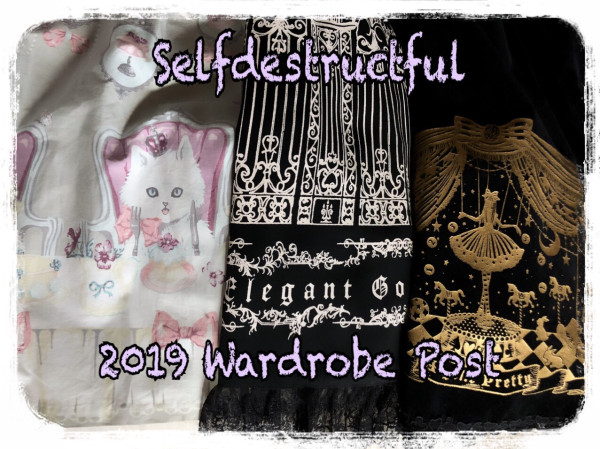 I originally discovered Lolita back in 2004 and started my venture into wearing it in 2006. I had my first Brand purchase in 2011 and my addiction spiraled out of control from there. I have tried every possible trend and style over the years, and this is where I have ended up. It's funny to think how toned down my daily style has become considering some of the crazy OTT AP prints that use to call home in my closet. Since I have collected so many things over the years plus having a good amount of accessories and other items to supplement my daily lolita wardrobe/lifestyle, I will only be focusing on my main pieces this year. However, if you have any questions on any of the items shown, please let me know!

Posted via LiveJournal app for iPhone.

Posted via LiveJournal app for iPhone.

So I am finally getting around to posting my wishlist. I figured doing it this was was easier then the little notebook paper I currently have in my notebook.

It seems to me that a lot of new lolitas (or at least 7 years ago when i first started out lol) tend to go for black and white, get horrible scarry black and white lace monsters, and suck.

I think ita is commonly associated with black and white because there are just soooo many black and white tacky/ita/ebay/lace monsters out there. But honestly the black and white colorway is so beautiful! But maybe its just because I've always been in love with what is now refered to as old-school lolita.

My tip for beginers who like me are inlove with the black and white color scheme, may I suggest secondhand older baby pieces? You can get them as cheap as $50 for a black cutsew dress with white lace details, or even one of their many empire waist jsks that they always seem to re-release
Baby is such a lovely brand and their plainer pieces seem to go really cheap second hand, and they are really cute! Paired with some cute cheap secret shop or bodyline shoes and some black, white, or even diamond patterned knee socks, otk socks, or tights leaves you with a stunning outfit for cheap! :] And dont forget a hair accessory which can also be found for cheap second hand, or at a claire's, or any offbrand lolita shop or mainstream store, or even hand made!

Heck you dont even have to be a noob! I've been into lolita for 7 years, getting close to 8, and I
still do this! Nothing wrong with budget lolita! :D

Anyways this silly/stupid rant begun to form in my head because I knoticed even though i have a few sweet prints here and there, almost everything is black, white, or both! 8D And as it is summer noob madness time I also see a lot of black and white outfits. Some good some bad...and im tired of people saying that black and white is ita. Not all black and wbite is created equaly! ;]

Actually, i think now im in the mood to update my wishlist with some moe good ole fashion old-school and old-school looking meta and baby! I really wish angelic pretty stuck to their roots more. Or at least released stuff that was similar to their old stuff! Ahhh...but i suppose it dosent hurt to dream~

Ok so I've been thinking about how people act in lolita. Some girls seem to like to act as prim and proper while in lolita as possible, and othrs who seem to believe that while they are dressed all sweet and cutesy, the need to act as loudly and rudely as possible. Perhaps thats is just their honest personallity, or perhaps they are puting on a show to emulate what lolita means for them, who knows.

However I dont agree when girls freak out saying "How dare you not act like a proper lady while dressed in lolita!!!!!!!!!!111!1" Then again nor do i agree with the girls who say "Its just clothes! I do what I want!" For me I was always tought to be polite to strangers and polite to your elders. I was tought good table maners and how to act in public. I was tought there was a time and place for certain behavior. If someone comes up to me out of the blue and is rude to me wheather I am wearing lolita or not, I will try to be polite or ignore it. However if I just happen to have my buttons pushed, you bet your frilly ass I'll let them have it.

I wonder how others think on this subject. Excuse my random rant, I've just been thinking about this since this past Saturday while a girl was saying how it was funny that I was dressed really sweet and cute but I had no problem throwng around a swear word or two, but it made me awesome and a bad ass. Lol.

Also, this weekend was amazing! The mini meet was so much fun and I got to see a lot of people during the weekend which was a nice change. I posted to d_l today. I keep on meaning to post more, but i never remember to take pictures of my outfits! >_ So here is a picture of my babies! Ive just counted 8! Im so excited!

Also as of last thursday we have made it an official weekly thing to go down to the bar for kareoke! But it cracks me up because i always get crazy stares like they dont believe my age...probably because i wear lolita haha. And it always cracks me up because then i get the drunken older women telling me how cute i look and they love my style- in and out of lolita. :]

Omfg! So excited! My momy rat just had babies! It looks like 8 but hopefully by tomorrow i will be able to see how many for sure! <3

First entry in forever! I really do plan to post motlre! Here, and also daily_lolita! So short entry, im on my way to edc now but before i can upload everything I'll just leave you with a quick photo of my makeup for tonight! :]